Pinterest is a very important social network that can no longer be overlooked. Many businesses are using this platform to get more exposure and sales. This week I thought I would add some tips for marketers looking to improve SEO and get more business through Pinterest.

How can you use it to increase sales? How can it lead to more blog traffic? Effective marketing and knowledge of Pinterest can boost your visibility and use rich media ads to capture a whole new audience. It’s said that Pinterest is the Google Search of the Display Network with over 100 million subscribers and hundreds of millions of boards. Each board is categorized by interest so there is an audience for every type of business. “People are planning out really core and important parts of their lives on Pinterest,” Ben Silbermann, Pinterest’s chief executive and co-found, told the New York Times. If you want to get started or increase your effectiveness in using Pinterest, consider these five marketing tips: 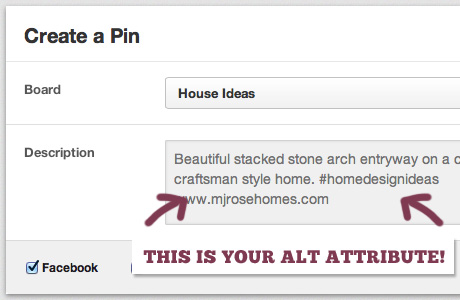 Unlike many social media platforms, Pinterest allows 500 characters in your description. Users don’t really like reading lengthy descriptions so it’s a good idea to limit yourself to 200-250 characters for best results. To optimize the description it’s best to include keywords, 1-2 hashtags, and a call-to-action. Hashtags makes it easier for users to find your content through their search query and allows your pin to show more often.

Because Pinterest is a visually driven site, it’s important to try split testing with a variety of different imagery to optimize click through rates. You can experiment using photos with or without text, new keywords, lower bids, and new audiences. Eventually you’ll find what works for your business and can get the return you’re looking for. 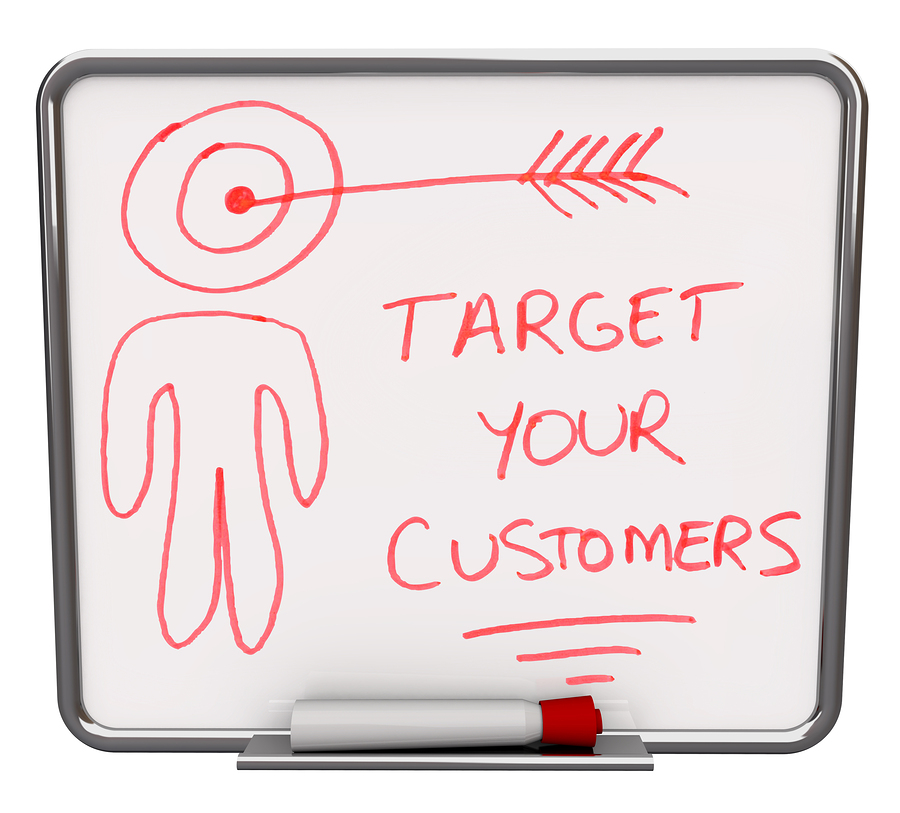 Pinterest is not as advanced as other social platforms when it comes to targeting but taking advantage of the features offered is a great way to increase your click through rate. You can show pins based on location, device, gender, and language.

The quickest way to get followers on Pinterest is by finding and inviting people you already know.  It’s easy to find friends through facebook, Twitter, Google, and Yahoo accounts.

(Note that unfortunately promoted pins are currently only available in the US at this time. Canadian businesses are unable to utilize this feature).  Promoting pins allows you to pay and get pins seen by your desired audiences in relevant search results, category feeds and home feed. This is a great way to reach the right customer at the right time.

Here are some other important growth and usage stats released by Pinterest:

As the dust settles on Cyber Monday, we thought some sales stats and figures are in order. We obviously don’t have this year’s figures, but let’s take a look back at last year and see exactly how much buying power was exercised on this relatively new creation.

The biggest numbers we found were the increases in mobile purchases and social media recommendations playing increasingly larger roles.

A trend to really keep your eyes on: The largest increase was in mobile spending, which was up 55% over 2012. We predict that number will increase even more this year.

A breakdown of devices used:

On the mobile front, iOS users spent more than Android and other platform users:

Combined iOS and Android accounted for 93.5% of all online sales via mobile and tablet.

Here’s something the Zuck isn’t going to be thrilled about: Social Media recommendations drove $148 million in sales, but Twitter was responsible for 24%, Pinterest for 17%, and Facebook for only 12%.

Although traffic will be heavy all day, the peak (last year) was at 8:00 AM (PST) and held steady throughout the day and into the early evening.

So what does this mean for the savvy marketer? With options available at speeds never seen, the smart shopper is looking for convenience, so make sure the mobile version of your website is ready and waiting for them when they go online.

If your page loads slow, guess what? According to Jason Freeman, a licensed psychologist specializing in consumer behavior, “We live in a society where instant gratification is no longer a bonus, it’s expected. We get frustrated when (what used to take 30 seconds) now takes just a few seconds.”

The best way to make sure your customers find and stay on your page? Make sure your mobile version is as snappy and easy to navigate as your full version.

We’ll pause the proceedings for just a bit to allow you to check your mobile site right now. Go ahead, we’ll be here waiting for you when you get back.

So what did you find? Is your mobile site not all that it can be? Did you have trouble navigating? Was the process to buy your goods or services a clearly marked path with as few obstacles as possible?

Now the real test, and this might take a few more minutes. What device did you use to check your site? It’s a great idea to try the functionality of your site on multiple devices so you can see how it performs.

What works well on an iOS device might struggle a little on an Android or other device. Or vice-versa.

As you can see from the numbers above, people are accessing mobile sites from all sorts of devices, so why single out a group from buying from you?

So that’s a wrap for this week, check back next Tuesday for our “Techies Christmas List,” chock full of ideas for the techie in your life!

A few months back we published “The State of Social Media.” (We republished as a reminder in October.)

The opening disclaimer was this: with the ever-changing landscape that makes up the Social Media World, these figures will be accurate for approximately one month. Two at the most.

So now it’s a few months later. Let’s take a gander at how those numbers have changed in just a short while:

So as you can see, in just a few short months each of these platforms (with the exception of Pinterest) has shown a dramatic increase in the number of active users.

And that’s really the most amazing of all: active users. These aren’t people who decided to jump on the bandwagon and then quickly abandon their profiles.

These are numbers of people who actively engage on a daily basis with these platforms.

While the numbers have shown an increase, what hasn’t changed is the fact that you absolutely need someone in the right chair managing all of these for you, leaving you to focus on and in your business.

Remember the old-school “complaint boxes” that were posted near the exits, especially at restaurants? Well, those boxes still exist but now they are digital inboxes in the form of comments and reviews online.

Now they’re out in the open for everyone to see, and those comments (especially the negative ones) need to be addressed in public.

There’s nothing worse for your business if someone sees a complaint or negative review on your social media sites and that comment goes unanswered.

Next week we’ll be discussing the effects a negative review or comment can have if it goes ignored, or worse, responded to badly. You’d be amazed how easy it is to diffuse a tense situation if handled in a polite and timely manner.

In the meantime, if you have any questions, please feel free to email us right here and a member of our team will be in touch with you ASAP.

Disclaimer: with the ever-changing landscape that makes up the Social Media World, these figures will be accurate for approximately one month. Two at the most.

But that’s kinda the point of this piece: the minute someone announces that they know “all there is to know” about social media, I check out. No one knows it “all.”

Because it’s a constantly changing scene that evolves constantly. One of my favorite movies is “The Social Network” and I love, love, love the line “It never ends, it’s like fashion.”

Just when we think the newest platform can’t get any more advanced, BOOM! It does. Just when we pride ourselves on having mastered the newest tips and tricks, LOOK OUT! Those new features will be replaced by more advanced ones before you can even get your blog written.

We all remember when Facebook hit the 500 million user mark. We were astounded that Twitter even worked (who would’ve thought 140 character sentiments would be so popular?)

This little photo site called Instagram blew up faster than any site in recent memory and Pinterest continues to blow people’s minds with photos and videos.

As of publishing date, here’s where the biggies stand on a popularity front:

So the question stands: are you using the right platforms to get your content in front of your target audience? With facts and figures available at the touch of a keyboard, we, as marketers have to make sure we’re spending our resources wisely and not just blindly blasting our message out, hoping that it finds the right set of eyes.

This is where Social Media Management enters the picture. You have a great product or service, your Social Media platforms are your chance to put a face (and a personality) on your brand and really stand out form the crowd.

Seems easy, right? It is if you have the right person in the right chair at the right time. If you’re lucky enough, you have an online marketing manager, social media manager, and traditional marketer all rolled up in one person.

If you don’t, then it’s absolutely time to make sure you have that spot filled. That’s where we come in. Let us take the guesswork out of your social media questions. Let us focus on the online world, leaving you valuable time to work on and in your business.

Have questions? We have answers. Feel free to email us right here!

Have a great day!